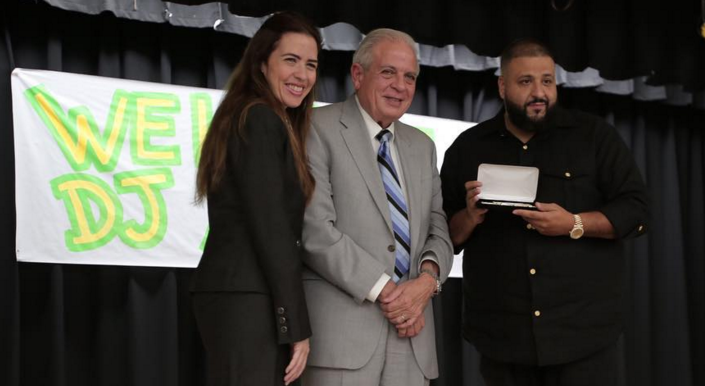 DJ Khaled Donates $5k To Miami Middle School. Is Given Key To The City

DJ Khaled made an appearance last week at Citrus Grove Middle School where he watched students perform before presenting the school with five thousand dollars. He then received the key to the city from Miami’s mayor.

The thing that jumps out at me here is that number. Five grand? Khaled what the fuck are they supposed to do with five grand? For a public institution that is a ludicrously small amount of money. In fact, Khaled, I have seen pictures of you pouring bottles of champagne that cost that much under water.

At this point I’m going to preemptively respond to the comment section and admit that no, I have never given that much to any institution. I attempted to give $100 to Haiti in 2010, but the payment bounced (because of… how my bank account was set up…), and I ended up donating $18.50.

One thing I’ve never understood is what do you do with the key to a city? Is there any real use to it? I’m pretty sure it doesn’t unlock every door in the city, but maybe there are a handful of secret bathrooms scattered around town that can only be accessed with this key? Just thinking out loud here.

Cause if all it takes to get the key to Miami is to drop five Gs and hit some kids with a “YOU THE BEST” then there’s gotta be a few dirtbag towns in the midwest giving out keys for $450 and a couple half-hearted high fives.

For everything I’ve said about this story though, I’m not gonna give Khaled a drop in points. He technically is helping out the community, even if he’s putting in less effort than The Lakers on defense. By the way, does Haiti still need a few bucks? Cause I wouldn’t say no to the key to the city for Port-au-Prince.