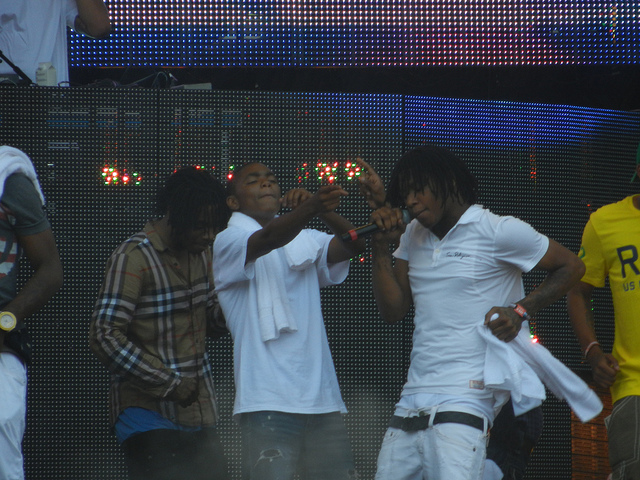 Chief Keef Eludes Police Using A Hologram (No, For Real)▲5

This week police in Illinois took to the stage at a benefit concert for the late Melvin Carr in Indiana in order to arrest the Chief Keef mid-show. They were dismayed to find that they were unable to complete their arrest, as the performance was actually a hologram of Keef, beamed in from LA, that vanished as soon as police arrived because apparently we are living in the fucking future holy fucking shit.

Keef has several outstanding warrants in the state for yada yada yada, can we talk about the fucking hologram??

This is seriously like the intro to a sci-fi action movie. Brutal police forces in a harsh dystopian wasteland (sorry, Indiana) storm the stage to capture the an elusive freedom fighter only to have him vanish in flash of light. Except it actually happened wtf.

The answer to my question, it turns out, is Alki David, the CEO of Hologram USA: a company that used up all of their imagination building a hologram machine and had none left over to think up a clever company name. Overall, a smart move by David, making headlines in order to fill the void left by the crash of Digital Domain Media (creators of the Tupac hologram) who were rumored to be in talks to take the act on tour with the likeness of various other deceased artists.

I’m giving Keef +5 for finding a way to appear at this benefit concert despite the fact that he is is apparently unable to set foot in the state without drawing a police presence. Until Young Thug escapes from a SWAT team using a jetpack, Keef is the closest thing to Star Wars in the rap game.

I am also willing to Alki David as large a street credit boost as he wants if I can use this machine, for just one day, to avoid having to actually attend my next family reunion. Ball’s in your court, David.