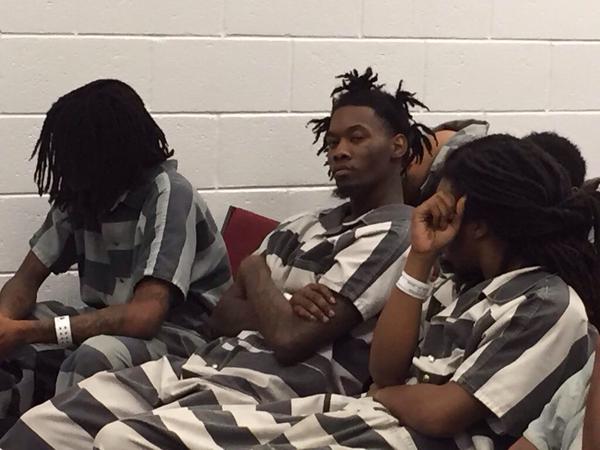 After all the brawling at shows, highway shootouts, and beef with GBE, I assumed there was nothing Migos could do anymore that would surprise me. I was wrong.

The initial arrest wasn’t so shocking (guns and narcotics are kind of Migos’ thing), but shit started to heat up three days later when news surfaced that, while Takeoff and Quavo were back on the streets, Offset had been denied bail due to his history of legal issues. Rather than be daunted by this, Offset decided to abide by the old saying: “Every setback is just a new opportunity. An opportunity to start a prison riot”

And that’s exactly what he did.

Details are sparse, but apparently this all began when Offset got into it with another inmate on Saturday 5/2. It’s only speculation, but I like to think that the incident ended with Offset shouting “None of you seem to understand. I’m not locked in here with you, YOU’RE LOCKED IN HERE WITH ME!”

While this kind of activity might boost your reputation on the inside, it isn’t the kind of thing that makes a judge inclined to let you out on bail. The following Friday he was denied bond for a second time and responded by yelling obscenities at the judge. Because ya know… Fuck it, I guess.

The whole thing definitely sticks to this whole doin-hood-shit thing Migos has going on, and I’m giving them a significant bump, but dude ya gotta stop. I’m already resigned to the fact that I’m not gonna see a Bobby Shmurda show until I’m old enough to collect social security, and now Migos has delayed their Yung Rich Nation tour. What’s it gonna take for me to see Migos live?

Props to anyone who prints out this article and relays my message to Offset by sneaking it to him hidden in a cake.